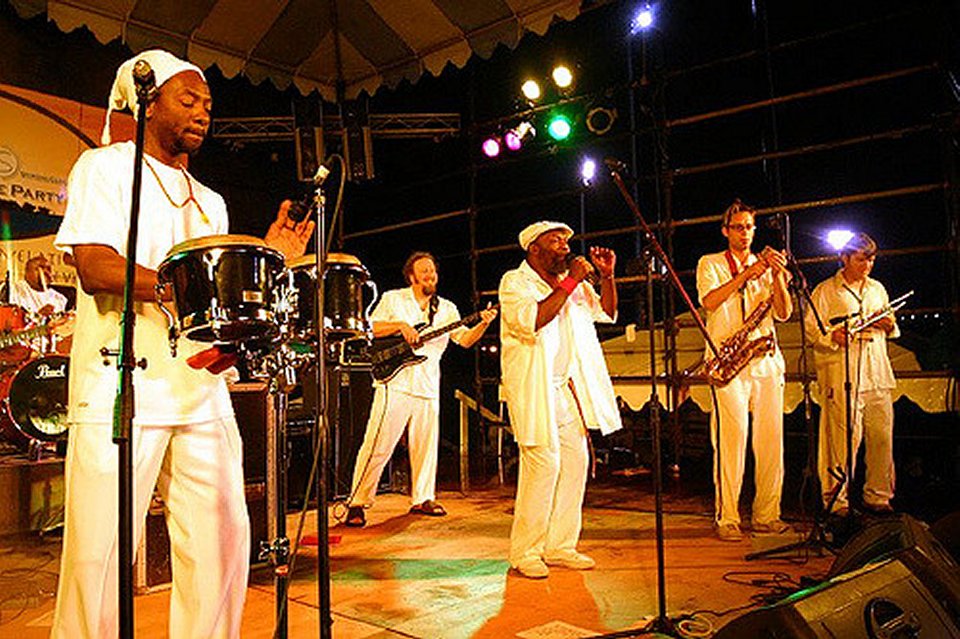 Nothing slips you into “cool mode” faster than reggae music. In fact, dropping Bob Marley’s “Stir it Up” results in instant cool with the first note. Suddenly, life is sweeter and the skies are clear. Time for a rum punch!

But why is it that Jamaican music is so completely engaging? Why does that distinctive beat (with or without steel drums) connect directly to your spinal column and make you move?

Ironically enough, reggae doesn’t usually involve steel drums much, and traditionally — at least lyrically, it’s not a light-hearted genre. But this seemingly contradictory state of affairs doesn’t make it any less appealing.

Many outsiders confuse reggae with another popular Caribbean music genre: Calypso. In fact, they have very little in common. Reggae is a modern music form that developed during the 1960s, much like American classic rock and roll. And from some of the same roots, including American R&B and jazz. It seems that the reggae movement aligned similarly and seemingly during the same time frame as U.S.’ rock music.

Furthermore, although calypso also developed out of protest, its origins are much older. Calypso’s origins lie in the island of Trinidad from African and French roots. African rhythms were used by slaves to mock their overseers and masters. It seems like a lot of music lies in protesting oppression and rebellion against authority. But as protest isn’t the only thing that defines calypso, the political message isn’t all that defines reggae.

Reggae owes a lot of its fundamental influence to Jamaican mento music. You may even find a bit of calypso since it couldn’t fail to have an influence on other Caribbean islands. As such, reggae is played in four-four time (similar to rock and roll), but the emphasis is on the offbeat. So, when counting time — one and two and three and four — the emphasis is on the “and.”

Another defining characteristic of reggae is the instruments and how they’re used. Unlike calypso, it uses a standard drum kit rather than steel drums. In addition, it also uses a little extra snare. And some reggae drummers add a second, higher-tuned snare to their set.

Bass guitars lead the rhythm. You can’t play reggae without a bass guitar and a drum set, basically. Bass guitars are thick and heavy. Even rhythm guitars follow the bass and drum, rather than adding a counterpoint to the lead, as in most rock and roll. Perhaps that’s why it makes you want to dance. Also, in reggae, rhythm guitars keep the offbeat, and are often played in a choppy, scratchy fashion, called “skank.”

One of the most defining characteristics of reggae is the “toast.” In Jamaican music, the “deejay” isn’t the guy putting on the records. (He or she is called the “Selector.) In reggae, the deejay talks or chants over the rhythms. And yes, this is the origin of modern rap music. The rapping is more melodic that modern rap, and sometimes it’s done in a monotone voice. Finally, toasting is probably one of the strongest signatures.

The Origins of Reggae

Reggae finds its roots in Jamaican folk music. Called “mento,” many find it sounds very similar to the hillbilly folk music found in the rural U.S. The use of similar instruments gives it that similar sound. Mento uses acoustic guitars, banjos, drums made out of anything — much like American folk music. However, mento definitely carries island rhythms (some of which it may have picked up from calypso).

Influenced by modern R&B and jazz in the 1950s, young musicians developed ska, an island-flavored dance music. Soon, a genre called “rocksteady” emerged, which had a slower beat and more romantic lyrics. It was the romantic power ballad of ska, meant for close dancing and courting.

Soon after, political changes became a focus of young people on the island, arising from Jamaica’s independence from Britain in 1962. Enter reggae.

First use of the term reggae.

The first official use of the term was on a 1968 release called “Do the Reggay” by Toots and the Maytals.

The first name most people associate with reggae is Bob Marley. Although it became internationally popular along with ska — especially in the United Kingdom — Marley and the Wailers launched this genre as a political message into the mainstream.

Banding with the Wailers in 1963 and then disbanding 11 years later, it was Marley’s Exodus album released in 1977 that gave him a worldwide reputation. It held on the U.K. charts for 56 weeks. His follow-up album, Kaya, had several hits, as well. Marley is known for infusing reggae with spirituality. He’s currently an icon for the legalization of cannabis use, which is a religious practice in his Rastafari religion. Marley passed away in 1981 of melanoma.

“Stir it Up” is a more romantic song, with lyrics about love and a slow rhythm. But, it’s also one of Bob Marley’s biggest hits. Purists might even call it rocksteady. Either way, it’s one of the best reggae songs ever released.

As an original member of the Wailers, Peter Tosh went on to have a successful solo career when the band broke up. Tosh released Equal Rights in 1977 and Bush Doctor in 1978. Also an advocate of Rastology, Tosh retired from public view in 1984 after releasing his album, Mama Africa. He decided to seek a more religious life. Tosh was murdered in 1987 during a home invasion in his home in Jamaica

With the real name of Winston Rodney, Burning Spear launched his career in 1969 after Bob Marley recommend he audition for Coxsone Dodd at Studio One. He had a few hit singles before signing with Island Records in 1975. He launched his own label in 1980. One of the hardest working performers in reggae, Burning Spear tours tirelessly. In 2000, his album Calling Rastafari won a Grammy. And again in 2009, with Jah is Real.

Jimmy Cliff’s career took off when his single “Hurricane Hattie” became a hit when he was just 14. He was soon featured in a program called This is Ska! along with Toots and the Maytals. Soon, Cliff (officially James Chambers) was signed to Island Records and moved to the U.K. Many Jamaican artists launched their careers from Britain. His protest song “Vietnam” was described by Bob Dylan as one of the best of the genre,. Most recently, Cliff released his album Rebirth in 2012. However, unlike many other reggae greats, Cliff does not practice Rastology. His music carries a strong R&B influences as in the song “The Harder They Come,” below.

Influence on Rock and Dance Music

The influence of ska and reggae music has been rampant, particularly in U.K. music, and most notably in the punk and indie scene. As former members of the British Empire, many Jamaicans immigrated to England in the 1960s and 1970s, heavily influencing rock music there.

Ska was a big hit with “the mods” of the 1960s and then with the punk and new wave movements of the 1970s and 1980s. Bands like The Police and UB40 were heavily influenced by reggae, along with The Specials, The English Beat, and Madness.

The influence of Jamaican dance music can be heard in the 21st century as the revival of dub in dubstep electronica, and the dancehall genre of dance music.

Here’s a list of some other highly popular songs. Check them out, if only because they’re so much fun to listen to. Some of them you might already know!

If you’re visiting the island at the right time of year, catch one of the amazing music festivals in the land where it all began.

The Rebel Salute festival is held on January 15th of every year in Saint Ann Parish. The festival also features dancehall performers, but the focus of the show is on root reggae and conscious music. The festival celebrates health, and no alcohol or red meat are served or permitted. They do offer a campground during the two-day event. Get more details at their website or Facebook Page.

Reggae Sumfest is the largest musical festival on the island, held every July in Montego Bay. Established in 1993, it has featured some of the biggest Jamaican music performers, R&B artists, and attracts lots of young fans. Tools & the Maytals, The Mighty Diamonds, and dancehall favorites appear. For more information about performers and ticking info, visit their website or Facebook page

If you can’t wait till you get to Jamaica, or just want to share the one love with your friends and family now that you’re home, check out the Reggae Festival Guide website. As a worldwide phenomenon, you should be able to find a concert near you. You can also follow them on Facebook. You’re sure to find band or concert playing near you.