How to Make a Jamaican Rum Punch for a Party 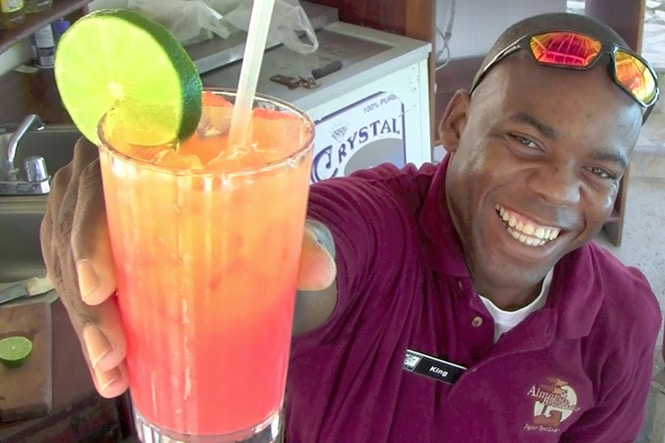 Rum is one of the biggest products and exports of Jamaica, so rum is used in everything from cakes to cures for the common cold. There are plenty of different cocktails and mixed drinks that use rum, but the most enduring rum drink is the classic Jamaican rum punch.

At almost any party in Jamaica, you are certain to come across a pitcher of rum punch. This cool, refreshing drink has a pleasantly sweet and sour flavor that makes it an island classic. Jamaican Rum Punch is so much a part of the Jamaican tradition that during the 50th Independence Anniversary Celebration a special Punch was originated. Keep reading to learn more about the history and composition of rum punch! 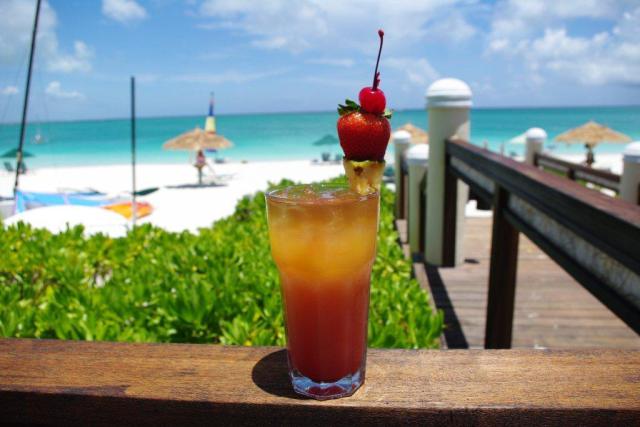 Jamaican rum punch has a strong history of the British beverage called known as punch. In the United Kingdom, punch has a history that dates all the way back to the early 1600s when aristocrats would drink punch before going on elaborate hunts. It actually gets its name from the Sanskrit word pancha which means five.

This refers to the five key ingredients, alcohol, water, lemon juice, sugar, and spices, in any classic British punch. When the British colonized Caribbean countries and started producing rum there, rum quickly became the alcohol of choice for punch. The British planters who lived in Jamaica and Barbados altered their classic punch recipes to use local ingredients.

The most ancient version of punch was from Barbados, where rum was first developed. It contained rum, lime juice, cane syrup, water, nutmeg, and bitters. Jamaicans improved on this recipe by making a more flavorful version of the punch that did not require expensive spices. They substituted bland water for tasty fruit juice and did away with the nutmeg and imported bitters entirely. This tropical drink started out as an elitist British drink. Over the years as it’s popularity grew, Jamaicans turned it into a party beverage that could be enjoyed at any celebration. When Jamaicans started their big tourism industry, hotels began welcoming guests with a glass of rum punch. Tourists took these recipes back to their homes, and Jamaican rum punch became popular worldwide.

Rum Punch is just a popular drink in the Caribbean and especially in Jamaica. When you are mixing your punch creation, it should not taste like alcohol on the rocks. It’s about an even blend of ingredients to create a smooth taste. In the end, when you are drinking this punch it should put you in the spirit of being in tropics. That beautiful red drink, decorated with an umbrella and lime should be the taste of the Caribbean.

Now you can swirl that smooth punch around in your mouth and lets your taste bud relish your thirst. With this high expectation No wonder it’s the drink of choice as you enter the hotel lobby on your Jamaica vacation. To simply put, Jamaican rum punch is as authentic as it comes. It is delicious, refreshing and the perfect drink when you think Jamaica, Reggae and the Caribbean.

Rum Punch has achieved great popularity status. No wonder it’s the definitive choice of hotels in the Caribbean to serve up some rum punch as you enter their lobbies during checking. Today it’s the expectation as you plan your Caribbean vacation to forward to drinking some rum punch.

Many tourists discover Jamaica after hearing Reggae singer-songwriter, Bob Marley. Now they leave Jamaica as a rum punch lover with a new discovery. Life is grand when you are having it your way in Jamaica. 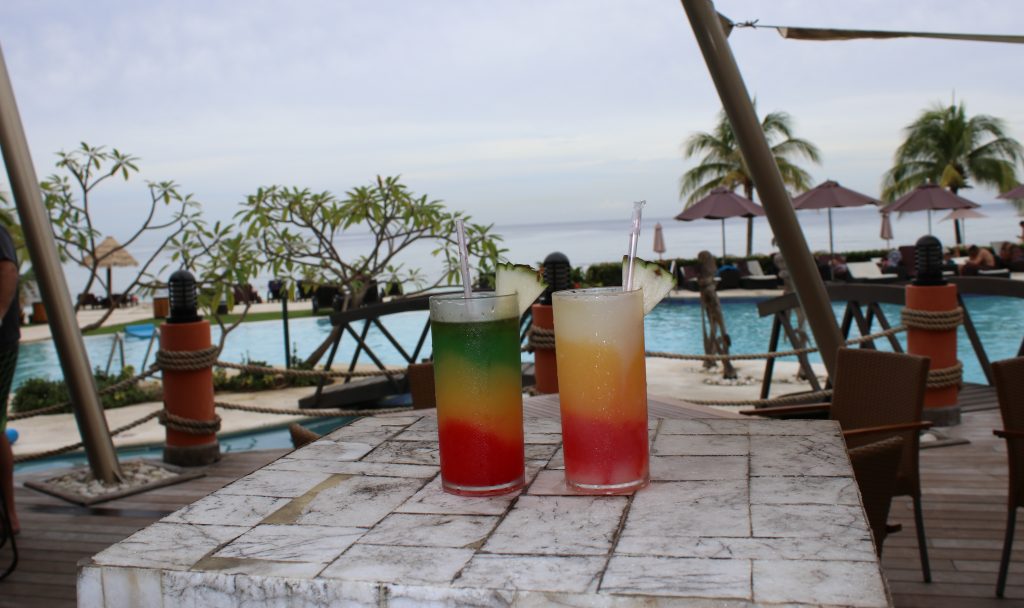 In Jamaica when it comes to a family gathering, especially during the holiday seasons, rum punch is served in many homes. This red beverage is a tradition and it’s almost always expected to be offered when visiting homes of families. It is expected to be served when you have visitors or visiting a friend. Persons planning their menu for the holidays generally have rum punch on the top of their list.

As the holidays or special events approach, this family favorite drink is usually made well in advance of the needed dates. The punch aging process is best to serve when kept refrigerated. The period of time can vary from a few days to as little as five to eight hours before serving. Like wine, rum punch gets better with age. This does not mean you cannot drink it instantly, it simply means it tastes better over time.

One of the greatest things about rum punch is that anyone can make it. That’s right anyone can make it you don’t need a mixology degree. It is so easy that in past years, the older generation in Jamaica didn’t even think about using a recipe book.  When they were ready to make rum punch, they started with the basics ingredients. You really only need four ingredients and one is water. Yes, simplicity in the making and run punch for the taking. So the saying is, “One of sour, two of sweet, three of strong and four of weak” is all the ingredients you will need to make your delicious punch.

And as a long-standing tradition, once you finish making the punch, you add some pimento/allspice berry. This whole grain dried berry seasoning gives the punch some added flavor. Over a period of time, the drink becomes fermented and more refreshing. The longer the punch sits, the better it tastes and smoother it goes down the tropical way.

Making the punch is easily achievable to attain the best result on your rum punch journey. Just double, triple and or quadruple the ingredients base on your taste test. So as you add a rum punch to your menu choice, be sure to get some decorating presentation. Dress it up, whether you are serving your punch in a glass or leaving out in a bowl, add pieces of pineapple, slices of lime. How about some watermelon, all those decorative fruits are tropical and bring out the Caribbean.

So you don’t feel like making your own punch, no worries, buy it. Rum Punch drinks are sold in most liquor stores and many stores that sell alcohol beverages. The punch is bottled by many distilleries and sold in various sizes by the companies. Knowing where it all started and how far it came, it’s truly incredible of the acceptance of this drink. Although rum punch gives you a sense of relaxation and the feeling of being in the tropic, it’s still an alcoholic beverage and should be consumed responsibly.

One of Several Easy Recipes

Companies such as J. Bullock & Sons Ltd makes Spiritz Rum Punch while Appleton Estates have rum punch of their own that’s quite popular. Rum Punch drink is easy to make and this recipe below is one of many.

Direction: Place ice in a glass with ingredients and stir.

Then there is Calico Jack Rum Punch which is the latest of them all. Making rum punch well in advance of the time when it’s needed has been a long tradition in most homes. Over the past decades, the name is synonymous with Jamaica and the tropics. Over the years, rum punch has become a household name due in part to its popularity. You can find stores with the name rum punch, racehorse owners name their horse Rum Punch, Rum punch. There are boxing events that’s dubbed, “Rum Punch Fight Night.” These fighting events are sponsored by Wray and Nephew. They are one of Jamaica’s oldest distillery over-proof white rum makers.  Wray and Nephew along with several other distilleries make their own brand of Rum Punch. While all these companies make their own brand of rum punch, they all managed to add a touch of their own personalities which makes their band unique. 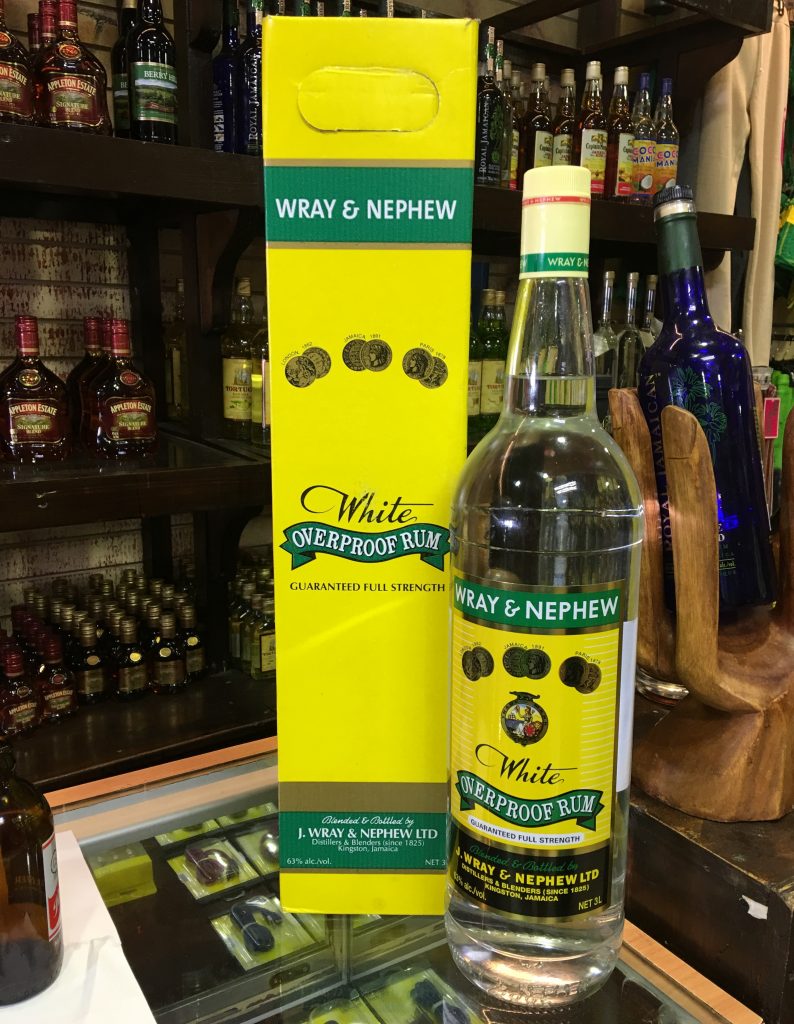 How to Prepare Jamaican Rum Punch at Home

There are many different variations on Jamaican rum punches, but they all follow the same basic format. Any Jamaican rum punch is mixed according to the old rhyme, “one of sour, two of sweet, three of strong, four of weak.”Traditionally, the sour is provided by lime, the sweet is from sugar or grenadine, the strong is rum, and the weak is water, ice, or fruit juice. Mixing all of these together results in the classic orange-colored Jamaican punch. You can use any type of rum, and your rum punch will still be delicious. However, the most common rum for a punch is the classic Wray & Nephew white overproof rum. Here are a couple of the most popular rum punch versions in Jamaica.

This version of rum punch shows up everywhere from fancy restaurant dining rooms to simple family celebrations. The key to making it is just keeping the ingredients simple and fresh. You can use any combination of juice or water as your “weak” ingredient in the punch. Many people customize this recipe to include more of their favorite fruit.

Of course, there are many different spins on Jamaican rum punch, but this is one of the trendiest versions. When tourists think of Jamaican rum punch, this is normally the version they are imagining. It contains plenty of different tropical juices and two types of rum, so it is definitely flavorful. 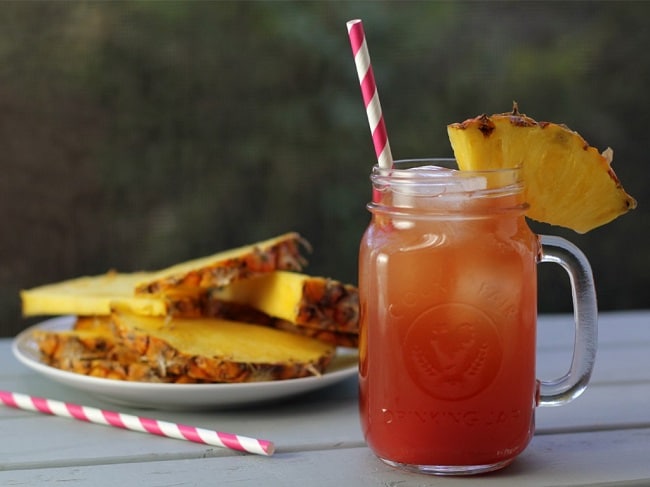 Where Can You Try Jamaican Rum Punch in a Restaurant?

Because rum punch is such a quintessential Jamaican beverage, any Jamaican restaurant that serves alcohol will sell it. You can try it out at Miss Lily’s 7A, one of the most authentic Jamaican restaurants in the East Village. The talented bartenders at this restaurant know how to whip up a delicious punch.

When you get the chance to travel to Jamaica, one of the can’t-miss destinations for rum punch is the famed Appleton Estate. This distillery offers educational tours and provides some delicious drinks in their tasting room. Be sure to check out their rum punch when you are there.

There are a variety of ways to make the delicious Jamaican rum punch. One way is to use a refreshing blend of rum, fruit juice, and sweetener mixed together and chill in the refrigerator. Feel free to experiment with adding different ingredients and making your own signature rum punch recipe. What’s your favorite version of Jamaican rum punch? Let us know in the comments!