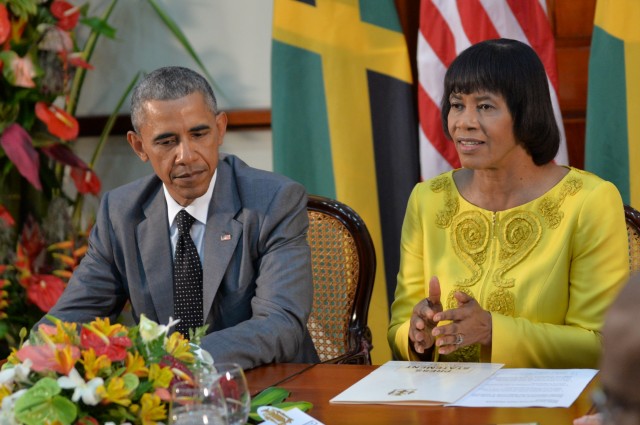 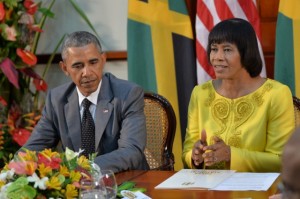 So you asked, what’s all the fuss about United States President Barack Obama to Jamaica? Well it’s a real big deal; it’s monumental that President Obama chose to visit Jamaica. The last time a sitting president visited Jamaica was Mr. & Mrs. Ronald Reagan in April 7-8, 1982 and now with President Obama, the visit is historic. The country will benefit from this visit as the Jamaican economy is doing much better. Also, with the new Economic Reform Program which is closely monitored by the International Monetary Fund and a more business friendly atmosphere, investors are in a better place when it comes to doing business in Jamaica. 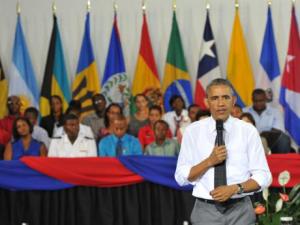 President Obama and “The Youth Town Hall Meeting” at The University of the West Indies. Mona Campus.

The country waited in anticipation on Wednesday April 8, 2015 as Jamaicans lined the street from Norman Manley International Airport, waiting for Airforce One, which landed at 7:31pm. Jamaicans at home and abroad are extremely proud and take pride in the president’s visit to the island. President Obama was greeted at the airport by the Governor General Sir Patrick Allen, Prime Minister Portia Simpson-Miller along with opposition leader Andrew Holness and many others. Accompanying the President was several of his top aids included New York Congresswoman with her Jamaican Roots, Ms Yvette Clark.

Once the greeting was over, Mr. Obama took off in Marine Air Force One Helicopter to the beautiful Pegasus Hotel in Kingston. As it is customary to clean up when you are having visitors, Jamaicans kept its tradition going by showing the highest respect to by far the most loved US President by making sure the island was looking its best. 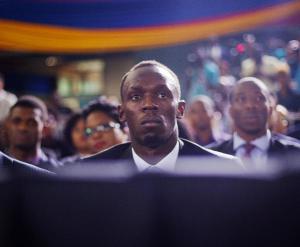 Usain Bolt listen to President Obama at The University of the West Indies.

Well, as Jamaicans put their best hospitality forward, it did not go unnoticed or in vain; President Obama gave back in a big way by adding “The Youth Town Hall Meeting” at The University of the West Indies. Mona Campus. The President met with tomorrow’s leaders in a Question and Answer session and made the announcement to invest US$70 million to help young entrepreneurs in the Caribbean and Latin America. The program is called “Young Leaders of the Americans,” and it will go a long way to help tomorrow’s generation.

Following talks with Jamaica’s Prime Minister Ms. Portia Simpson-Miller, President Obama stated that people in the Caribbean are paying significantly more for energy despite having less-resources and they are looking for ways to lower the cost through clean energy and increase energy efficiency. This visit will further strengthen the friendship of both countries. 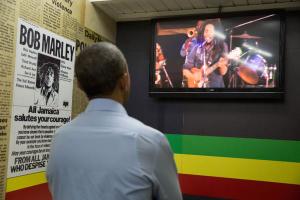 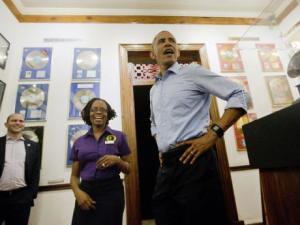 Mr. Obama’s visit Bob Marley Museum on Hope Road in Kingston and received the grand tour from tour guide Natasha Clark. The President showed few of his reggae moves listening to Bob Marley’s “Exodus” Album and mention that, “that’s the song we were playing on Airforce One on our way here.” Ms Clark said the President said that Exodus is his favorite Bob Marley album and he still has all Bob’s albums. President Obama last stop in Kingston was at the National Heroes Park. The President laid at a wreath at the monument erected in honor of the thousands of Jamaicans who courageously gave their lives in World War I and II.

This visit by President Obama to Jamaica will go down in history as one of the most anticipated visit to the island April 8-9, 2015. 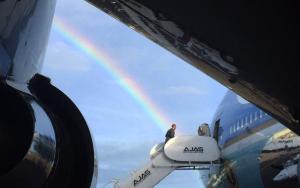 Pres Obama travel in peace as the Rainbow came out to greet him.