An Ounce of Weed, Please

Weed Plant growing in the wind in Jamaica.

The Tourist: Where can I get an ounce of weed?

The Jamaican Business man: Excuse mi, weh yu sey, (Excuse me, what did you say)where can I get an ounce of weed.

The Tourist: Yes, please! Where can I get an ounce of weed, you know, an ounce of marijuana or an ounce of Ganja as they say in Jamaica?

The Jamaican Business Man: Blough-wow, Wey yu tek-mi fah (Dam, who do you think I am) Yu si mi wid an ounce a weed, (Did you see me with an ounce of weed? Mi look like mi sell weed? Do I look like I sell weed.

The Tourist: Aren’t you Jamaican? Don’t all Jamaican smoke weed?

The Jamaican Business man: A wah do dis Mon, yu a mad mon. (what’s wrong with you, you must be crazy). Mon go wah from mi. You have di wrong mon. Man you have the wrong man. All Jamaican do not smoke weed. 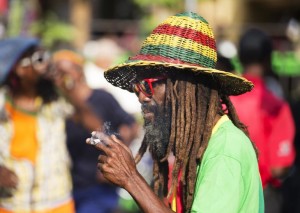 A Rastaman with his Spliff at the late Bob Marley 70th Anniversary celebration.
Pic courtersy of IBTimes.

Just as the tourist was talking to this Jamaican business man, the tale has long existed that if you are Jamaican, you smoke weed. But regardless of popular belief, we at (AJE) A Jamaica Experience are willing to go way out on the limb and hope the limb don’t break, and say that there are less than 10 percent of Jamaican people who smoke weed. While no polls were taken to determine the actual number of Jamaicans who smoke weed, AJE believe the number of Jamaicans that smoke weed is closer to 6 percent of the population. Yes, we said it and I know what you could be thinking while laughing, “those people at AJE must be smoking that good Jamaican ganja? As they say in Jamaica, we nah tek bak talk (We are not taking back any talk).

But when it comes to weed and Jamaica, the conversation goes hand in hand. Many reggae musicians have many song about weed. Gregory “The Cool Ruler” Isaacs the late Jamaican singer/songwriter said it best in one of his hit song “Rumors.” The lyrics says, “Rumors them Spreading, claim that a sensi (weed) we planting.”  So, even though Jamaica is known as the country with the best cali-weed (potent weed), it’s just rumors, don’t believe the hype, “Most Jamaicans do not smoke weed.” 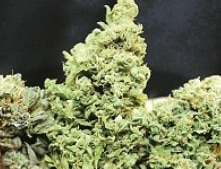 Medical Marijuana, wink, so they say it’s on display.

The Tourist:  So how is it that the United Nation voted Jamaica as one of the happiest island if all Jamaican don’t smoke weed? Come on man!

The Jamaican Business man: How mi fi nuh (How should I know), ask the UN!, but we are happy to have you in Jamaica. Enjoy yourself and “One Love”

My Youth, brethren, People, never, never, listen to rumors. The Jamaican government recently passed the law making possession of an ounce of weed even up to two ounces of weed for personal use a minor offence. The most that can happen in any situation is that you may get a ticket. Individuals are allowed to grow five plants or less on their property under the decriminalized law. Yeah, Jamaica is known as the land of milk and honey but that saying has been a part of the island’s history, long before Jamaica was believed to be the place that provide the US with the most weed.

So, in Jamaica, the saying is, “No Problem, Everything Irie (cool) and Cool Running.” Therefore, even in hard economic times, the respect for the tourist industry has not changed and the Jamaican people still continue to provide the best services. So the fact that the UN voted Jamaica as one of the happiest island should not be surprising. 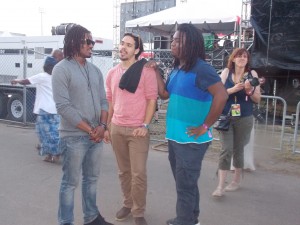 Zinc Fence Redemption Musician who back Reggae Singer Chronixx, backstage at Groovin in the Park, NYC 2014

When it comes to Jamaica West Indies in Kingston, the government must weed through pounds of paper (no pun intended) and find the right balance to help the country to become a world leader in medical marijuana and scientific research. As the decriminalize law takes effect, the licensing agency must get it right and keep Jamaican ganja farmers as the driver of the weed business.

While Partnership with foreign investors can and will be developed in a global economy, it’s important that Jamaican authorities do not sell out the weed business to big money players who will be coming to Jamaica. License are been given to have regulations in permitting weed/ganja farmers a lawful industry to grow their crop. At the same time the Rasta-man is saying, “Ah opportunity wi a deel wid. (it’s the opportunity we want)” As weed become more popular, so will the cookies, cakes, drinks and everything else that’s made with weed but the Jamaican people should lead in Jamaica.

After Years of Reggae Musician and Rasta saying “Legalize It”

Weed Plant growing in the wind in Jamaica.

Is Weed Legal in Jamaica.

They say nothing happens before the time and the saying continues to be true because for many years reggae artist/musician have been paving the way for the legalization of ganja. It was Jamaican singer/musician Peter Tosh who wrote the hit song, “Legalize it and don’t criticize it.” Now, thirty or so years later, the world decides it’s time to adjust the law and legalize and decriminalize the ganja law.

Jamaica Tourism industry will reap the reward with this change. Each year thousands of visitors come to Jamaica specifically as the tourist say’s, to get an ounce of weed or as singer/songwriter and wife to the late Bob Marley, Rita Marley song say’s “Roll a likkle spliff and tek a wiff (roll a little weed and take a smoke)”. Now with the decriminalization law, visitors must understand that the law does not allow the transporting and exporting of weed, you can simply enjoy the pleasures that smoking may bring you on the island. So the next time a tourist come and asked for “an ounce of weed” please or is weed legal in Jamaica? Or where is marijuana legal? You can tell them, yeh Mon, Welcome to Jam Rock, yu in a di right place. (Yes man, Welcome to Jamaica, you are in the right place). 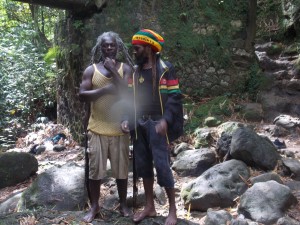 When speaking about the ganja law, according to Minister of National Security Mr. Peter Bunting, “it begins to correct decades of criminalizing tens of thousands of Jamaicans…for possession of a little spliff (weed cigarette). The Jamaican population is just under 3 million of which about 100,000 is Rastarifarians (Rasta’s), although the true followers of the Rasta religion maybe less than 40,000. Jamaica is the birthplace of Rasta since the 1930s and smoking weed has been considered sacred to their religion. So the decriminalization of ganja in Jamaica means Rasta can now smoke their spliff freely for the first time.

More ganja attention came about in April 2015 when the United States President Barack Obama visited Jamaica. During the visit, The President held a Youth Forum Conference at the University of the West Indies. During the Q&A, Miguel “Steppa” Williams of Jamaica asked and express to the President that he wanted to “Overstand and understand” the U.S. position now that Jamaica has decriminalize weed/ganja. While President Obama did not offer a direct answer, he did warn that with competition it will open the gate for large corporation to come on the island and compete against local marijuana farmers.

Weed Legal in some US States 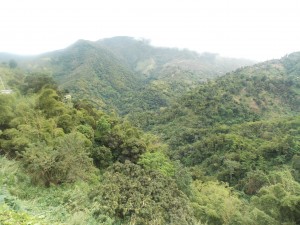 Blue and John Crow Mountain in the Blue Mountains.

Now that weed is legal in a number of US states and legal in Jamaica, parents must figure out ways to handle the challenging conversation when kids say, “Well, it’s legal” Parents must explain to their children that while their brains are in a developing stage, it’s NOT OK for them to smoke cigarette or weed or drink alcohol. As weed becomes the talk of the town and a movement of the people, parents must be honest with their children and explain the risk that comes with smoking weed as their brain go through it’s developmental stage. Adults must always remember that too much of anything is no good, everything must be done in moderation.

What do you think?