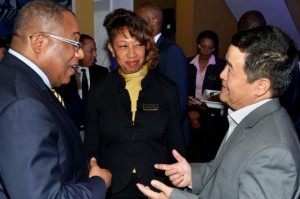 Minister of Industry, Investment and Commerce, Anthony Hylton (left) shares a light moment with Ambassador of the People’s Republic of China to Jamaica, His Excellency, Dong Xiaojun; and President of Jamaica Promotions Corporation (JAMPRO), Diane Edwards.

The Minister talked about JAMPRO being one of the worlds leading agency when it comes to promoting investment and trade both internationally and locally. Minister Hylton says, “The achievements we have made in positioning the country as more than a tourist destination, but as a viable place to do business, is attributable in large measure to the work of JAMPRO,” and “Since 2004, JAMPRO has repeatedly won the World Trade Promotion Organisation’s award for being the ‘Best Trade Promotion Organization from a Small Island Developing State.”  Mr. Hylton went on to say that the country has gained $183 billion from investment and up-ward of 173,000 jobs as a result of JAMPRO work.

In further discussions, she explained that JAMPRO was able to fund upwards of $100 million in technical assistance and grant funding to upgrade and improve these businesses in manufacturing and agro-processing sectors. Based on the success of Export Max I, an Export Max II was added. Also, the Investment Forum in 2012 was a great event which created significant business opportunities for the country.

There is a second investment forum which is schedule for March 2015 in Montego Bay, St. James. So, for all the folks who have been considering doing business with Brand Jamaica, the frst thing to do is to reach out out to Mrs Diane Edwards and her team at JAMPRO.