Island Vacation Prep: All You Need to Know About Jamaican Currency 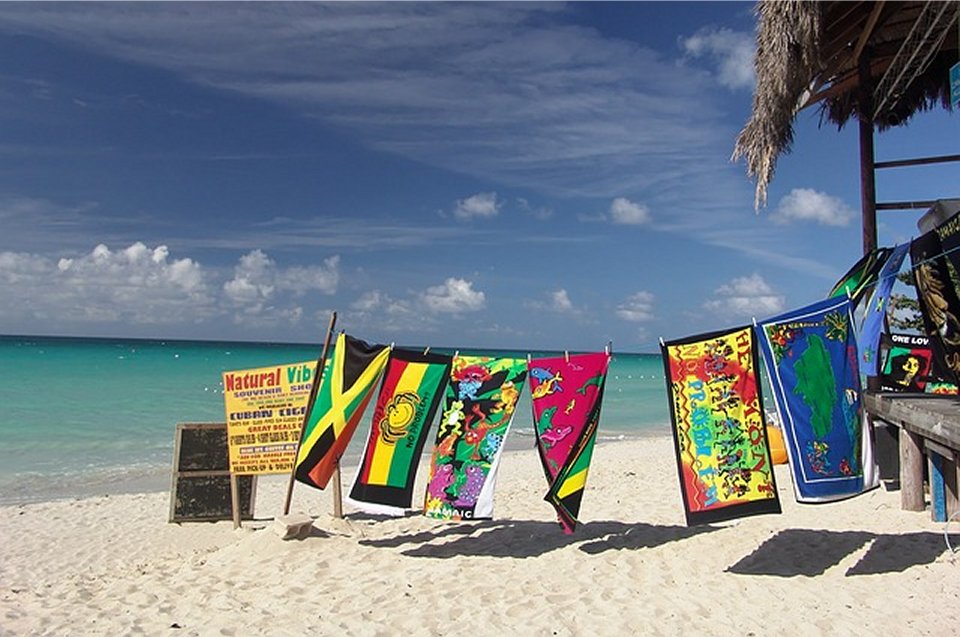 Understanding exchange rates and local money is complicated enough when it comes to traveling to a foreign country, and unfortunately, Jamaican currency can be one of the more difficult ones to pin down.

The colonial history of Jamaica and its currency makes for fantastic reading. However, most visitors are mainly interested in just finding the best way to pay for the things they want.

Like the United States, Jamaica has a decimalized money system. This means that 100 of their pennies equals one of their dollars. This should make it a little easier to understand how Jamaican currency works.

However, the value of the Jamaican dollar is so much lower than that of a U.S. dollar. Because of this, you’ll find some unfamiliar bills and dollars in your pocket after you make any exchange.

As a former British colony, Jamaica’s system of coins and bills more closely resemble those of the United Kingdom. That means they rely more on coins with dollar and multiple dollar denominations. Dollar coins are pretty rare in the U.S. We’re much more accustomed to coins worth less than our dollar.

Unlike other island nations in the British West Indies, Jamaica is the only one whose currency is based on the British half-pound sterling. Others in the area chose the U.S. dollar or Spanish dollar after independence. To make matters even more confusing, though, the reason the half-pound sterling was chosen was that it more closely reflected the value of the U.S. dollar.

“Nanny,” on the $J500 note, the only female among Jamaica’s national heroes. A fierce leader of the Maroons at the beginning of the 18th century, known as an outstanding military leader. Screenshot courtesy of The Bank of Jamaica

What is the Jamaica Exchange Rate

However, since the value of Jamaican currency is much less than that of the U.S., you may also find yourself walking around with $1,000 and $5,000 dollar bills. But don’t let give you a false sense of financial independence. As of this writing, one U.S. dollar is equal to about $126 JMD. Yes, that’s right. Your $J1,000 note is only worth about eight bucks!

The most frustrating aspect of the Jamaican rate of exchange for many visitors is its volatility. Ten years ago, 68 JMD would buy one USD. Jamaican currency has lost half its buying power in the last decade. 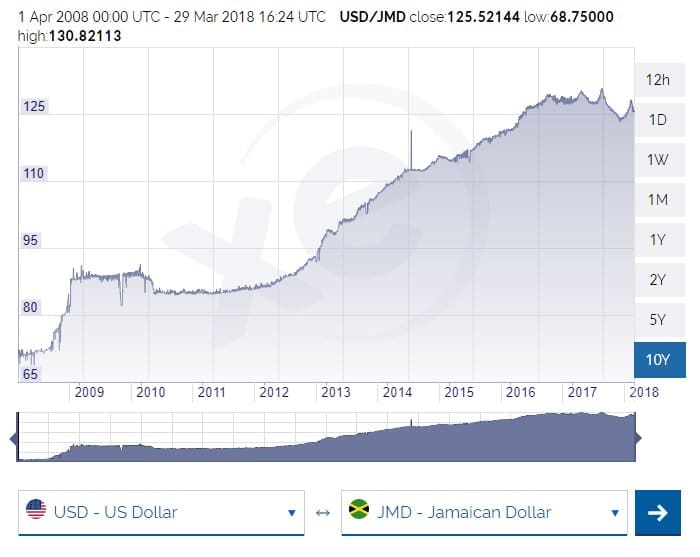 Finding the current exchange rate is not always as simple and googling 1 USD to JMD on your smartphone. The exchange rate can vary, with drops and peaks of a few dollars throughout the day.

Luckily, most major hotels, restaurants, and other tourist venues accept American money. Prices are listed in U.S. dollars, and any charges can be paid with them.

For smaller transactions on the economy, it’s best to have a small amount of Jamaican currency available for purchases.

A Brief Overview of Jamaican Money

Aside from being rather pretty to look at and fun for numismatics to collect, Jamaican currency comes in a variety of types and denominations.

There are older coins of smaller denomination that have recently been demonetized. In February 2018, the Bank of Jamaica announced that these small coins no longer held monetary value. As of February 15, 2018, the 1 JMD (or $J1) coin became smallest legal denomination of Jamaican currency.

These smaller coins include the 1 cent, 10 cent, and 25 cent coins. Their loss of worth meant that many people were simply throwing them away. 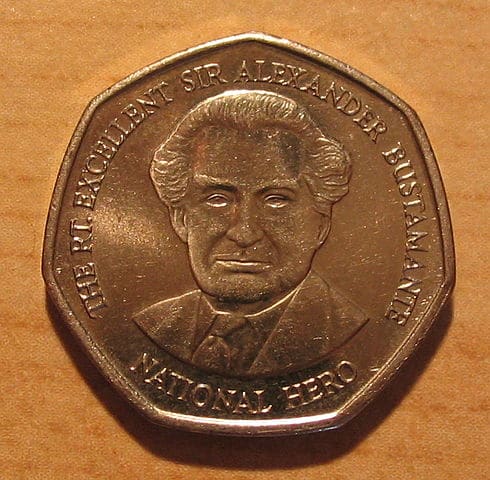 All Jamaican banknotes are the same size, just like bills in the United States. Jamaican money measures about 5.70 by 2.70 inches, making it slightly shorter than U.S. bills at 6.14 by 2.61 inches.

Additionally, if you’re doing a lot of business on the local economy, you’ll need to know the local slang. The 100 JMD banknotes are often called “bills.” The 500 JMD notes are sometimes called “Nannies.” The newer 1,000 JMD bill is called a “Manley.” The names refer to the Jamaican national heroes whose likenesses adorn the paper money.

My tip today from a young man from #Jamaica …. Hopefully I get to use this soon…. What I was told, this won’t get me too far lol… #JamaicanCurrency #JamaicanMoney #JamaicaHereICome

A Short Brief on Jamaican Currency

The first notes from the Bank of Jamaica were printed in 1961, and they featured portraits of Queen Elizabeth II. However, the country gained independence from Britain soon after, in 1962.

Jamaica switched to the decimalized system of money in late 1969. The switch to the 10/100 system also meant switching from shilling, pences, and pounds to the terms “dollars” and “cents.” However, to make the transition easier for Jamaican citizens, the sizes, weights, and colors of the bills and coins were retained to correspond to the British currency.

Since that time, new denominations have been issued to reflect changes in the country’s economy. New coins were issued, others demonetized. Most recently, the 5,000 JMD bill was introduced in 2009.

How to Handle Jamaican Currency on the Island

You can find the rate for Jamaican dollar to USD varies depending on where you shop. Although the tourist industry merchants deal in U.S. currency, small businesses away from the cities often don’t. And when they do, they can often fudge the exchange rate. And usually in their own favor. It’s not uncommon for a vendor to round up a purchase made in American money to favor themselves. And considering the quick-change exchange rate, perhaps we can’t blame them. Also, they’re legally required to issue change in Jamaican currency, which can also land outside your favor.

It’s important when shopping to determine the currency listed on pricing. Make sure you’re clear on it. Many of the smaller venues may list in Jamaican dollars, even if they’re for tourists.

Furthermore, although larger business usually accept American dollars, our coinage rarely makes the cut. You may find yourself getting change back in Jamaican money at large venues, as well.

Popular tourist spots like hotels, clubs, and restaurants will also take major debit and credit cards by Visa and MasterCard. Larger businesses like major hotel chains will often accept American Express, too. The Discover card is not widely accepted, however. Your bank might charge an exchange fee, but it may be simpler than trying to figure out the exchange rate. And it may be safer than carrying around a lot of cash of any denomination.

Found these in my desk drawer, not even sure which ones are still in use #Jamaica #jamaicancoins

Advice for Tourists in Jamaica

Check with your bank before traveling regarding hidden fees for calculating exchange rates when using your debit or credit cards in Jamaica. Even if fees can’t be avoided, at least you can prepare ahead for the extra expense.

Be prudent with money when visiting Jamaica, since the exchange rate can be confusing. Most travel guides recommend that you use U.S. currency wherever possible. This is partly due to its more stable value.

ATMs in Jamaica can be unreliable and even risky, according to Frommer’s travel guide. If you must use an ATM, use only during the day in a safe area. Note that ATMs cash withdrawals often carry large fees, too. Also, note that the ATMs often only provide Jamaican currency.

Although they fallen mostly out of fashion, travelers checks still work well in Jamaica. You may want to take some along, since the ATMs may not provide the currency you want when you make a withdrawal.

Exchanging money back to U.S. dollars after your return trip might require a receipt. So, a good plan of action includes only exchanging as much as you think you’ll spend outside of the tourist pale.

However, do carry small amounts of Jamaican currency to spend at small shops and for tips. You’ll find the best rates of exchange at commercial banks. Small restaurants, food stands, art vendors, and the like will most likely only take cash in Jamaican dollars. If you plan to take home authentic souvenirs, carry your budgeted allowed for them in Jamaican currency.

Enjoying your vacation means not worrying about money. No one wants to spend their holiday worrying about exchange rates or scams. The U.S. to Jamaica exchange rate can be pretty confusing, which means it can cause excess stress you do not need on your trip.

Part of reducing this stress is planning a budget for your expenses before even booking your tickets. Decide how much you’ll spend on lodging and dining. If you’re going to an all-inclusive resort, most of the worry about exchange rates and currency evaporates.

Deciding how much you’ll spend off the beaten tourist track will reduce some of that stress as well. Determine a budget amount ahead of time for souvenirs, small restaurants, and other entertainments. With a planned budget, you’ll know exactly how much to exchange and can plan ahead to get the best rate available.

Featured Image: CC by 0,  by 3dman_eu, via Pixabay