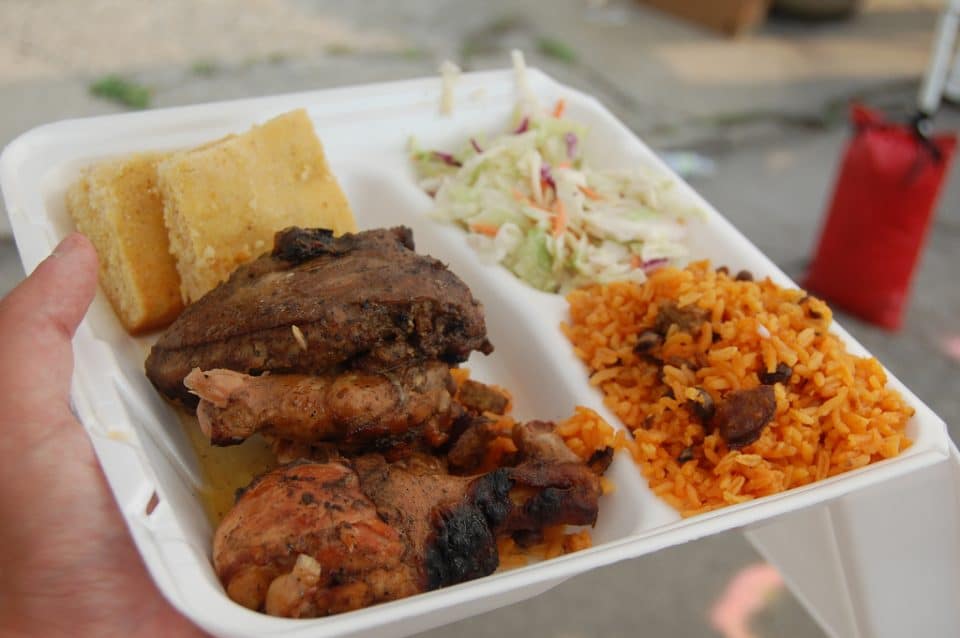 Jamaican Jerk is famous the world over. And so is the Jerk Festival. If you’re heading to Jamaica this summer, make sure to catch one of the many jerk festivals happening in late July and early August. It’s a great chance to try some of the delicious and diverse Jamaican cuisines. In addition, you can get a taste of Jamaica’s incredible music scene.

What Is Jamaican Jerk?

To make jerk, chefs dry rub or marinate meat with a very hot spice mixture called jerk spice. Jerk spice has a sweet, fiery taste. Every chef has his or own secret recipe. But some common ingredients in Jamaican jerk spice include garlic, thyme, cinnamon, nutmeg, cloves, allspice, and, of course, chiles. Modern chefs have used jerk spice on lots of different kinds of foods, including fish, vegetables, lobster, and even tofu. However, traditionally, the spice is best known for the preparation of chicken and pork.

A Jerk Festival is a Caribbean festival that celebrates this wonderful Caribbean cuisine. And lucky you, there isn’t just one. Jerk festivals generally take place in July and August. Two of the largest are the Portland Jerk Festival and the Montego Bay Jerk Festival.

The Portland Jerk Festival is the largest food and jerk festival in Jamaica. It also has the distinction of taking place in Port Antonio, “the home of Jerk.” This family-friendly festival is a day long and usually takes place on the first Sunday in July. Events include jerk cook-offs, live music, dominoes, and more. Adults can enjoy arts and crafts, and traditional performances from local musicians. For kids, there is shave ice, bouncy castles, fairground rides, face painting, and more.

The Montego Bay Jerk Festival is a huge, family-friendly blowout, held every year in Montego Bay. It’s the largest jerk festival in western Jamaica. In addition to food, festival-goers can enjoy live music, crafts, clothing and, as the Mo’Bay Jerk Festival website says, “everything jerk.”  Here’s an example of some of the music festival goers enjoyed in 2016.

What Can You Expect at a Jerk Festival?

Some might call it a “chicken festival,” after the world-renowned Jamaican Jerk Chicken. But it’s more than chicken. And, often, it’s more than Jerk. You can taste all sorts of Caribbean delicacies at a Jerk Festival. Fried plantains figure prominently, as do cassava cakes (“bammies”), curry goat, and the national dish of Jamaica, Ackee and Saltfish. This is a dish for the adventurous. The ackee fruit is poisonous unless prepared in a certain way. However, when it’s ripe, the fruit is very healthy, and may even reduce cholesterol.

Music is also an important part of jerk festivals — indeed, of many Jamaican festivals. Reggae is probably the most famous kind of music to come out of Jamaica. But at a Caribbean festival, you will also hear Calypso, Mento (the native Jamaican form of Calypso), Gospel, Ska, jazz, and more. A lot of Jamaican music has a catchy, danceable beat. At the same time, many artists favor humorous lyrics with subtle political undertones.

Can’t make it in July? Don’t worry. There are plenty of other Caribbean food festivals at other times of the year.

The yam is a very important part of Caribbean cuisine. In addition, it’s a huge part of the economy of the Trelawny area of Jamaica (from which Olympic champion Usain Bolt hails). This festival is often held around Easter time. The festival started small but has since grown a lot. One year, the festival even had 18,000 attendees! Every year, the festival crowns a Yam King and Yam Queen. In addition, you can gaze at gigantic yams, try different yam dishes, and play yam games. The day also includes, of course, a musical celebration of this terrific tuber.

Every year, on the third Monday in October (National Heroes Day), the historic community of Port Royal puts on its annual seafood festival. In addition to delicious seafood, you can enjoy a variety of live music, including reggae, gospel, contemporary, and dancehall artists.

Image CC by 0, by Nadine Doerle, via Pixabay.

Every November, you can experience the Jamaica Food & Drink Festival. The festival takes place over five nights. Each night has a theme, from “pork extravaganza” to “all things fried.” You can experience food from some of Jamaica’s finest chefs and best establishments. There is also a specialty food truck event.

Also in November, you can enjoy Jamaica Restaurant Week. This is where locals and visitors alike can sample food from some of the finest restaurants in Kingston, Montego Bay, and a number of other towns, often at a discount. Restaurants put on special events, offer innovative menus, and pull out all the stops in this celebration of Jamaican culinary excellence.

Related: Things to do in Montego Bay

Jerk Festivals in the United States

Jamaican Jerk is popular the world over, and with good reason. As a result, a lot of places outside of Jamaica have their own Jerk festivals. Some of the more famous ones include:

The Grace Jamaican Jerk Festivals take place in a number of different places in the United States, including New York City, Washington, DC, Atlanta, and South Florida. This is the largest Caribbean food festival in the United States. Just like its sister festivals in Jamaica, the Grace festivals offer a magnificent selection of Caribbean food, as well as music, crafts, and culture.

Atlanta also has the Atlanta Caribbean Jerk Festival. This festival takes place in September, and continues the Jamaican tradition of “food, family, and fun.”

Image CC by 0, by Miyagisama, via Pixabay.

Vermont might seem an unlikely place for a tropical festival, but they do have one! The Vermont Jerk and Reggae Festival is a family-friendly place to enjoy Caribbean food, reggae music, and more. There is also a rum brewing contest and a rum tasting!

A Jamaican Jerk Spice Recipe for You to Try at Home

Can’t make it to a festival? Don’t worry. You can pop on some Bob Marley, invite some friends over, and make a festival of your own. And here’s a recipe for Jamaican Jerk Spice to get you started.

You can use this as a rub to spice up meat, seafood, vegetables, or anything else. Stored in an airtight container, it keeps up to three months. Recipe from Coastal Living, via MyRecipes.

If you’re planning a trip to Jamaica, try not to miss one of the fabulous jerk festivals. But if you can’t make it to the island, you can get a taste of Jamaica at any number of festivals in the United States. Jamaica, they say, is in the heart.

Featured image: CC by SA 2.0, by Stu_Spivack, via Flickr