Jamaican Art: A Celebration of Life on the Island 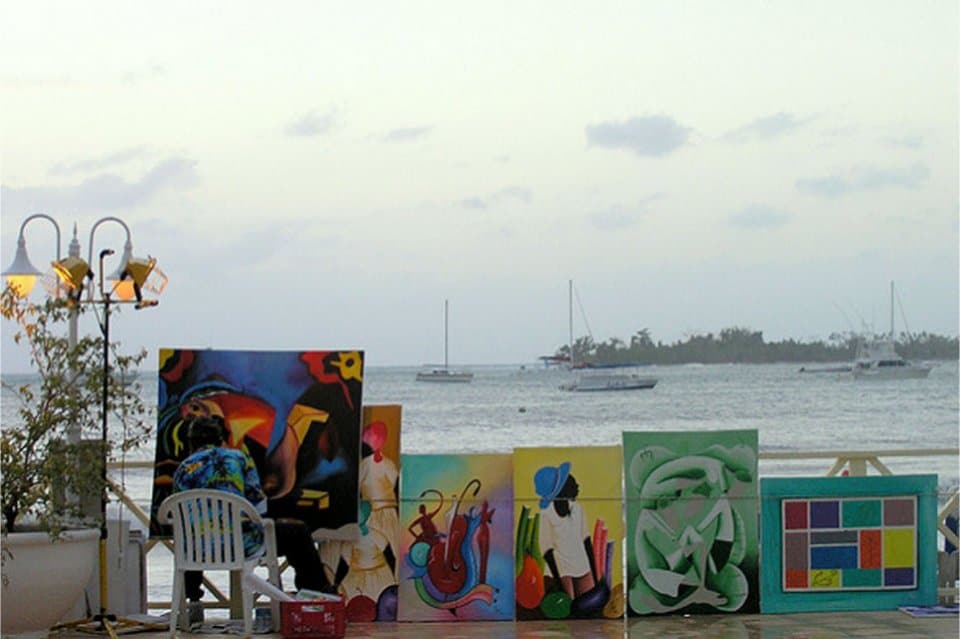 Jamaican art is known for its vivid colors and striking portraits of everyday heroes and national figures. Painting and sculpture really bloomed on the island in the 20th century and rose to worldwide attention. Inspired by folk art and the cubist and art deco schools, Jamaican paintings feature movement and rhythm. And the fusion of traditional European and outsider techniques has resulted in bold statements in the last four decades.

History of Art on the Island

Artistic expression in Jamaica goes back to the carvings of the earliest inhabitants, the Taino. Carvings of local gods and goddess, called zemis, were made for religious purposes. However, 80 to 90 percent of the Taino population died out. This was caused by smallpox carried by Spanish invaders. As a result, it left little of the Taino works. Therefore, until the emergence of the modern movement in the 20th century, most art followed the European style.

The modern movement changed everything though, thanks to Edna Manley. Wife of national hero Norman Manley, Edna Manley is known as the “mother of Jamaican Art.” Arriving from the U.K. in 1922, Manley mostly specialized in sculpture using native Jamaican wood. Her early work made use of geometric forms and cubist concepts.

British Council scholarships brought many talented Jamaican artists to study in the U.K. during the 1950s and 1960s, resulting in a movement of worldwide respect for Caribbean artists.

Independence from Britain in 1962 resulted in pride from Jamaicans, and they began exploring their African roots through their artistic work. Split up into two groups, art in Jamaica found expression by both trained and self-taught artists. European-trained traditional artists produced “mainstream” works that followed major trends in Europe.

Artwork by up-and-coming folk artists, mostly self-taught, also found fame. Known as the “intuitives,” their images of island life became a movement in its own right. By the 1980s, however, these two varying styles began to fuse.

In the 1990s and 2000s, art in Jamaica became infused by pop art and modern culture. This included influences from street art, fashion trends, and even musical genres.

Edna Manley wasn’t the first Jamaican artist with a strong sense of culture. Isaac Mendes Belisario was the first documented Jamaican-born professional artist. Born in 1795 and trained in London, Bellisario’s paintings are full of color and characters. He was the first artist to show the rich culture of the island. His paintings were considered iconic images for the newly independent Jamaicans in the 1960s.

For UN International Day of Remembrance of Slavery Victims and Transatlantic Slave Trade, "Koo-Koo, Actor Boy", from Isaac Mendes Belisario's series of lithographs published in Kingston, Jamaica, in 1837-38. Issued on the eve of Emancipation, Belisario's remarkable lithographs are the first visual representations of the Jonkonnu masquerades performed by the enslaved on the streets of Kingston during the Christmas and New Year holidays. These Afro-Jamaican masquerades were transgressive, functioning as an assertion of slave autonomy and resistance. @yalebritishart Rare Books and Manuscripts collection has a complete set of these rare prints in their original bindings with the extensive letterpress #internationaldayofremembranceofslaveryvictimsandinternationalslavetrade #slavery #jonkonnu #isaacmendesbelisario #belisario #sketchesofcharacter#yalecenterforbritishart #lithography #masquerade #subversive #resistance #jamaica

With a Jamaican mother and English father, British-born Edna Manley launched the modern era of Jamaican art. She criticized fellow artists for a lackluster echo of European styles. And she challenged them to express a more intense sense of cultural pride.

Born in 1911, Kapo was both an artist and religious leader. One of the defining artists of the “intuitives.” he began painting in the 1940s. Finally, his work became popular in the 1960s. Kapo’s charming paintings depict rural life with vivid colors and agricultural themes.

Born in 1920, Albert Huie trained at the Institute of Jamaica. He worked as an assistant for Edna Manley in the 1940s. Huie polished his skills at the Camberwell School of Arts and Crafts in London. He then finished training at the Ontario College of Art in Canada. Huie painted poignant portraits of workers as a commentary on socio-political themes.

Today, the works of Albert Huie have us feeling nostalgic and completely inspired. “Albert Huie was born on December 31, 1920 in Falmouth, Jamaica and passed on in 2010. He was best known for his folkloric landscape paintings, which celebrated the lush Jamaican countryside and the people who worked the land." (Source: Encyclopaedia Britannica) Top left: Albert Huie, Top right: "The Water Carrier" – year unknown, Bottom left: "Noon" -1943, Bottom right: "The Counting Lesson" -1938 #SummerOfColour #SundayInspiration #AlbertHuie #JamaicanArtist #Painter

Bridging the gap between early 20th-century Jamaican art and today, Barrington Watson studied at the Royal College of Art in London. His work on behalf of Jamaican artists has been life-changing for many aspiring artists on the island. He became the first Director of Studies at the Jamaican School of Art. Also, Watson co-founded the Contemporary Jamaican Artists Association. Known for his bold portraits of iconic figures in history, his series of striking images of everyday men and women are quite moving. Watson’s later portraits of the 1980s uniquely reflect the fusion between traditional and folk art. Watson died in 2016 at the age of 85.

This contemporary artist specializes in photography and sculpture, with a focus on his unique family heritage. Born in 1958, Albert Chong is of African and Chinese descent. As such, his goal is “putting more out there that’s about people of color.” A current project, called Acoustic Yard, documents obscure musicians and shares them with the world via YouTube

Born in Jamaica in 1954, Petrona Morrison is a media artist and sculptor. She trained in Canada at McMaster University, then entered the MFA program at Howard University. For the most part, Morrison’s work in multimedia explores political and personal issues. Furthermore, African aesthetics inform much of Morrison’s work. She recently retired as the Director of the School of Visual Arts at Edna Manley College.

Born in Kingston in 1981, Ebony Patterson studied at the Edna Manley College of Visual and Performing Arts. She also attended Washington University in St. Louis. Patterson currently teaches at the University of Kentucky. Using art to explore issues of self, identity, and the body, Patterson works in mixed media painting and collage. One of her most recognized series is “Gangstas for Life,” which explores masculinity in Jamaican dancehall culture.

Born in Manchester, Jamaica, in 1979, Michael Elliot attended the Edna Manley College of the Visual Arts from 1998 to 2002. Elliot says his approach is to address social and political themes in a metaphorical manner. He also specializes in photo-realistic techniques.

The National Gallery of Jamaica

The National Gallery of Jamaica works to preserve and promote Jamaican and other Caribbean art. Additionally, the gallery features several permanent installations. These include a historical retrospective covering art and artifacts from the Taino up to the eighteenth century. They also have a permanent Isaac Mendes Belisario exhibition. Furthermore, check out their gallery devoted entirely to the life works of Edna Manley.

Located in Kingston, Jamaica, admission is only $J400 for adults (about $3.20) and $J200 for seniors. Also, children and students with ID are free. Check hours to visit during your trip at the National Gallery website.

If you’re interested in artifacts along with art, check out the items for display at the National Museum of Jamaica. The museum houses a vast collection of artifacts from everyday life on the island, dating back to the art of the Taino. The collection features carved religious figures as well as jewelry and decorative household items. Also located in Kingston, Jamaica, the museum has several locations depending on the collection that interests you. See the website for details.

Art Galleries on the Island

This privately owned art gallery includes over 100 Jamaican artists. The selection runs the gamut from the “intuitive” to the most sophisticated. The gallery opened in 1980 with Annabella Proudlock at the helm, in order to share Jamaican art and crafts. Located in tourist haven Ocho Rios, Harmony Hall is open Tuesday through Sunday from 10 a.m. to 5:30 p.m. However, check the website before visiting, just in case. Additionally, you can stop after and enjoy a meal at nearby Toscanini.

This art gallery was established in 1991 and is located in Kingston. Grosvenor Galleries features works by Kapo and others. Owned by Doug and Tina Reid, the gallery also features an outdoor café. Furthermore, if you visit Jamaica in December, make time to attend their annual arts and crafts fair.

Whether traditional and highly trained or vivid and intuitive, Jamaican art is full of the joy, beauty, and even the hardship that make up island life. If you’re visiting Jamaica, make time to stop at one of their fine galleries or the National Gallery. You’ll have a blast and get inspired. Additionally, you’ll get a real feel for the island, the people, and the culture by seeing it through the eyes of their artists.